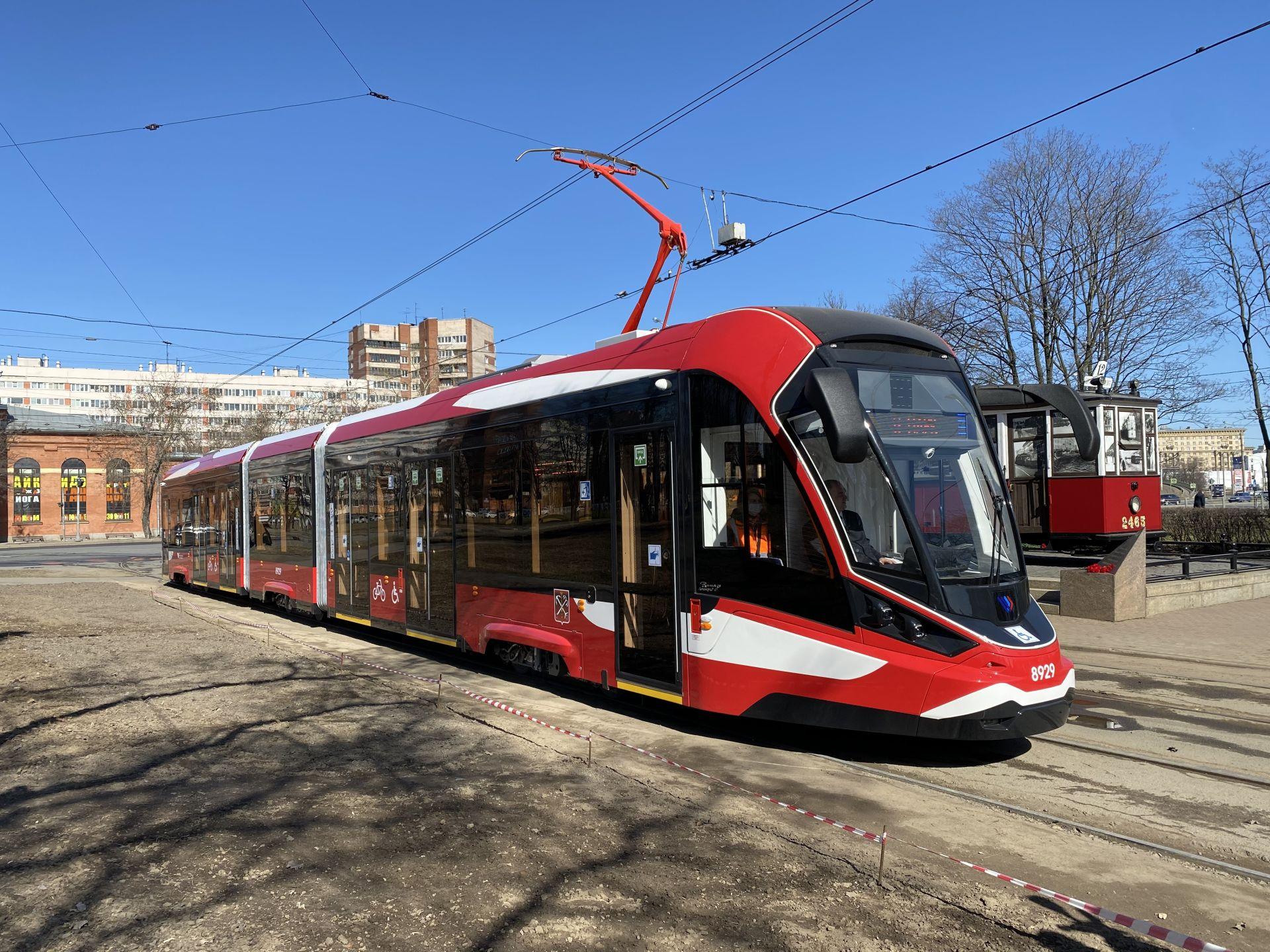 New trams manufactured by PC Transport Systems (PC TS) and supplied in 2021 have entered the St. Petersburg city routes. Among them there are two Vityaz-Leningrad unique domestically produced trams with aluminum bodies. On April 17, 2020 one of them took the route No. 60 – this is the third most popular route of the urban ground transport. Aleksandr Beglov, the Governor of St. Petersburg, Maxim Sokolov, the Vice-Governor, Kirill Polyakov, the Chairman of the Transport Committee, Denis Minkin, the Director of the Gorelektrotrans St. Petersburg State Unitary Enterprise, and Felix Vinokur, the President of PC Transport Systems were the first passengers of the tram.

"As far back as a year ago, the development of the tram with aluminum body was in progress, but today it welcomes its first passengers, and we can surely say that Vityaz-Leningrad tram perfectly fits into the urban landscape of St. Petersburg", Felix Vinokur, the President of PC Transport Systems, said. – "We have developed a unique product for the Russian market with a high potential for export. It is important for us that exactly St. Petersburg, with its rich tram construction history, became the first city where Vityaz-Leningrad trams first appeared. I am sure the city dwellers and the operating organization will be able to appreciate the advantages of the new tram and its aluminum body."

The important motive reflected in the name of the new Vityaz-Leningrad tram is the unprecedented feat of the transport industry workers of the WWII blockade Leningrad, who put the passenger trams back on tracks of the besieged city streets on April 15, 1942. Also the tram name revives the glorious traditions of the tram construction in the Northern capital. Apart from that, St. Petersburg for a lengthy period of time was the tram capital of the world with the largest tram traffic system, and this achievement was recorded in the Russian Book of Records and in the Europe Book of Records. It was here that the first inventor of the tram - Fyodor Pirotsky - lived and worked, and whom the Nevsky Electric Transport Plant, which is a part of PC TS, was named after in September 2020.

In 2021 PC Transport Systems delivered 13 trams to the Gorelektrotrans St. Petersburg State Unitary Enterprise in total and thereby fully performed the obligations under the contract entered into in November 2020. These are 11 nos. two-section 71-923 M Bogatyr M trams and 2 nos. three-section 71-931AM Vityaz-Leningrad trams.

71-931 AM Vityaz-Leningrad tram with aluminum body is an unrivalled product developed by PC Transport Systems, with no analogues available in the Russian market. This innovative model is an upgraded modification of Vityaz M three-section tram, which is well known to dwellers of St. Petersburg and Moscow. Aluminum alloys are highly resistant to corrosion, so it is possible to almost double its service life (to more than 30 years), as well as cut repair and maintenance costs. PC Transport Systems developed a passive safety system which is installed in the trams - this is a proprietary emergency crash system designed to mitigate the risks of injury to passengers and other road users, as well as to protect the core parts of the tram car structure in the event of an emergency collision. The energy-absorbing elements of the body and hydrodynamic crash elements mounted on the tram car front and rear bumpers will absorb kinetic energy. This technology is not used on tram bodies in Russia yet.

For the convenience of passengers, modern media complexes with wide diagonal screens are mounted in the tram, which is also equipped with the improved climate control system, USB connectors for charging mobile gadgets, access to a new type Wi-Fi, advanced control systems, CCTV, GLONASS/GPS location sensors.  The tram has 70 nos. seats, 2 nos. passenger accumulation areas with seats for passengers with limited mobility and bicycles attachment locations.  The total passenger carrying capacity is up to 185 persons.