Viktor Evtukhov, Deputy Minister of Industry and Trade of the Russian Federation, visited Nevsky plant of electric transport named after F.A. Pirotsky (part of PK Transport Systems, hereinafter PK TS).
Feliks Vinokur, President of PK Transport Systems, presented the first domestic tram with an aluminum body, Vityaz-Leningrad, to the Deputy Head of the Ministry of Industry and Trade of Russia. The creation of such a machine has become a new page in the history of the Russian tram industry.
The innovative model 71-931M "Vityaz-Leningrad" is based on the three-section tram "Vityaz M", which is well known to the residents of St. Petersburg and Moscow, and is its improved modification. Aluminum alloys are highly resistant to corrosion, which allows it to almost double its service life (over 30 years) and reduce repair and maintenance costs. On the initiative of PK Transport Systems, a passive safety system was installed in trams - an emergency crash system of our own design, which is designed to reduce the risk of injury to passengers and other road users, as well as to protect the main parts of the car structure in the event of an emergency collision. Installed energy absorbing body elements and hydrodynamic crash elements on the front and rear bumpers of the tram car will absorb kinetic energy. In Russia, this technology is not yet used on tram bodies.
“We have created a unique product that surpasses trams made of steel in terms of performance and consumer qualities,” stressed Felix Vinokur, President of PK Transport Systems. - This tram is lighter, which reduces the load on the rails, energy consumption, traction force and movement resistance, thereby increasing its operating speed. There are high-capacity air conditioners, in the entrance areas there are thermal curtains and a composite heat-insulated floor. Most importantly, at the end of its useful life, the aluminum body can be recycled and 80% of the money spent can be returned. Very soon "Vityaz-Leningrad" will appear on the streets of St. Petersburg, then residents, guests of the city, as well as industry experts will be able to appreciate all its advantages."
In addition to the tram with an aluminum body, Viktor Evtukhovov got acquainted with other developments of PK TS. This is the first in Russia articulated two-section electric bus 6245 with night charging, which is currently in the final assembly stage. The car will be able to cover up to 250 kilometers due to traction batteries and energy storage systems, which were also presented at the plant.
In addition, the Deputy Head of the Ministry of Industry and Trade of Russia inspected the unparalleled completely low-floor two-section tram 71-921 "Corsair", designed for narrow-gauge tracks with a width of one meter, which has successfully passed test tests in Kaliningrad. There were also presented new two-section trams 71-923M "Bogatyr M", eleven units of which will appear in St. Petersburg in the near future. Saint Petersburg was the first in Russia to order such equipment.
Considerable interest was aroused by the assembly line of 71-911ЕМ Lionet single-section trams for Moscow. In total, 40 units of such equipment will be delivered to the capital of Russia under the contract. In the near future, the plant will complete the final assembly of the first such cars, carry out commissioning, test tests and run-in, after which they will be sent to Moscow.
“A wonderful tram, excellent performance, you can see it has been made with heart,” said Viktor Yevtukhov, Deputy Minister of Industry and Trade of the Russian Federation. - For me, as the one in charge of the metallurgical industry, it is important that recyclable aluminum is used, in the production of which our country is one of the world leaders. Our task is not only to sell abroad, but also to create a final product from this strategically important raw material for us. In general, excellent production, high quality products." 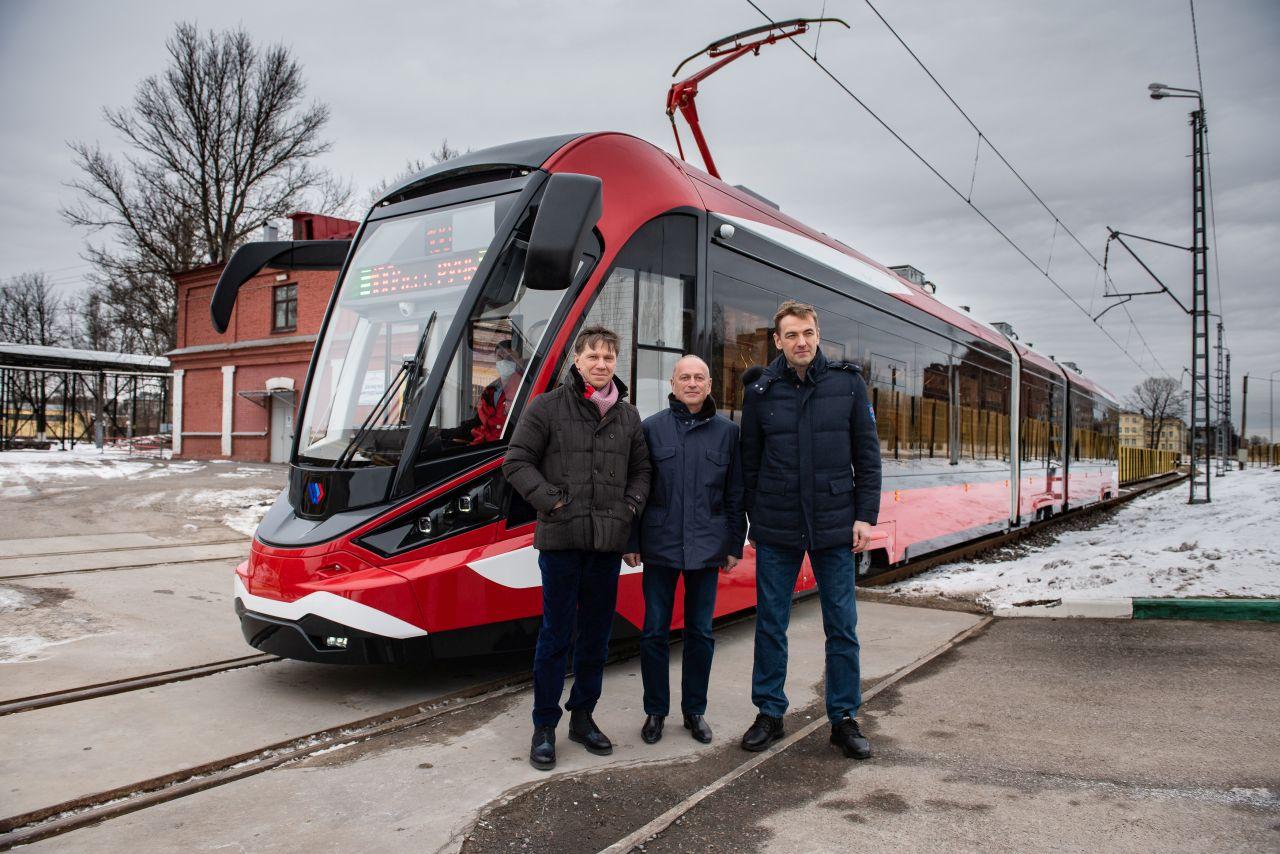 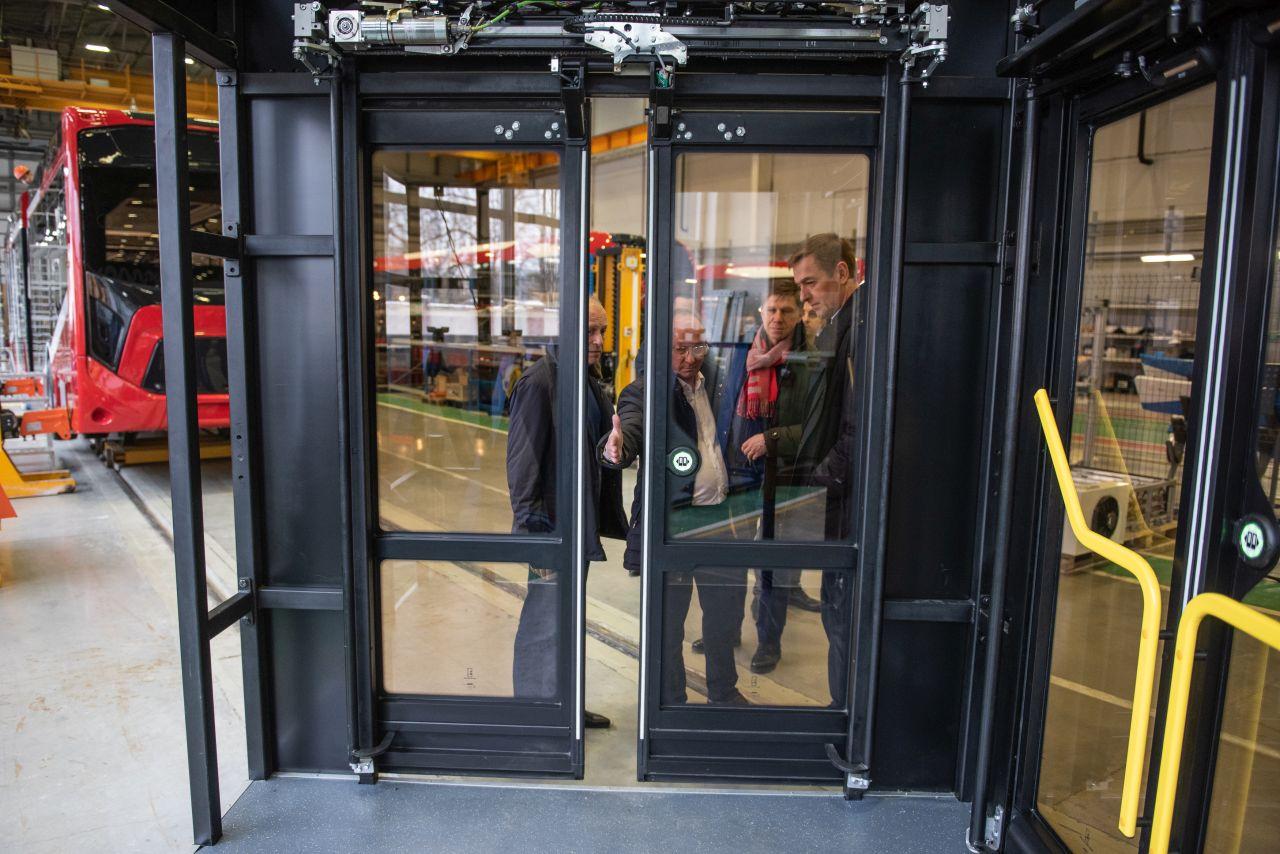