The Russian developer and manufacturer of urban electric transport, PC Transport Systems, thanks to the support of the Moscow Government, continues to fulfill its contractual obligations amid the coronavirus pandemic: 4 new three-section tram cars Vityaz Moscow have added to the capital's urban electric transport fleet. Taking into account the newly arrived cars, 344 Vityaz Moscow trams are currently operating on Moscow routes.
“For today, decisive actions of the Government are extremely important,” comments Feliks Vinokur, President of PC Transport Systems LLC. - The operational work of the authorities in the regions where our production sites are located allowed us to resume activities to fulfill our contractual obligations. We are grateful to the Moscow authorities for supporting business even in such difficult times. Today PC Transport Systems continues to supply new Vityaz Moscow tram cars. Today, over 400 employees of our company are employed in the production of rolling stock for Moscow. All of them have a stable salary; there were no layoffs at the enterprise. Production sites of PC Transport Systems operate in a reduced mode, all the necessary sanitary and epidemiological requirements are observed on the ground, all our employees are provided with the necessary protective equipment. By the end of 2020, our company will send another 50 Vityaz Moscow trams to the capital. Today, we continue to carry out daily maintenance, including disinfection of tram cars, ensuring the smooth operation of public transport. "
In mid-April, the production sites of PC Transport Systems resumed operations, which had been suspended earlier due to the spread of coronavirus infection and on the basis of the decree of the President of the Russian Federation dated 02.04.2020 No. 239, which restricts the work of major business entities in all regions of the country. All factories that are part of the PC Transport Systems company were included in the adjusted list of enterprises playing a systemic role for the economy of the respective regions, which allowed them to resume their work in a reduced mode and in compliance with all the necessary sanitary and epidemiological requirements, which are a prerequisite for resuming work In this situation.
As a reminder, in 2016, PC Transport Systems entered into an agreement for the supply of 300 three-section 100% low-floor tram cars 71-931M Vityaz Moscow over the next three years. In the fall of 2019, PC Transport Systems fully fulfilled the contract for the supply of 300 trams, having received awards from the Russian Book of Records and the European Book of Records for the largest number of three-section trams delivered under one contract to one city (for two years, six months and six days). During the implementation of the contract in the fall of 2019, the parties signed an additional agreement on the supply of another 90 trams of this model, 44 of which have already been delivered to the customer.
Three-section trams 71-931M "Vityaz Moscow" first entered the routes of the capital in March 2017. The elastic swivel bogie used in the design of the proprietary PC Transport Systems allows to achieve smooth running and a high level of noise insulation in the car. A spacious interior, a large number of comfortable seats, LED lighting lines, modern climate control systems, as well as USB connectors for recharging mobile gadgets and access to Wi-Fi provide a high level of comfort for passengers.
In the latest modifications of Vityaz Moscow trams, new developments have been integrated, which have significantly improved the quality of the base model 71-931M. In particular, the seating structure is made of stainless steel instead of standard plastic materials; the sound insulation system has been seriously modernized (improved double-glazed windows, hermetic door closing, additional sealing of joints, etc.); improved air conditioning system; the doors have an automatic memorization function: the passenger presses the button while driving, the system memorizes the command and automatically opens the door at the stop.
Currently, PC Transport Systems is developing an aluminum tram body based on the three-section model Vityaz Moscow. This is a breakthrough technology in the domestic market. Aluminum bodies are distinguished by their durability and corrosion resistance. In the future, such trams will be able to replace less durable steel counterparts. 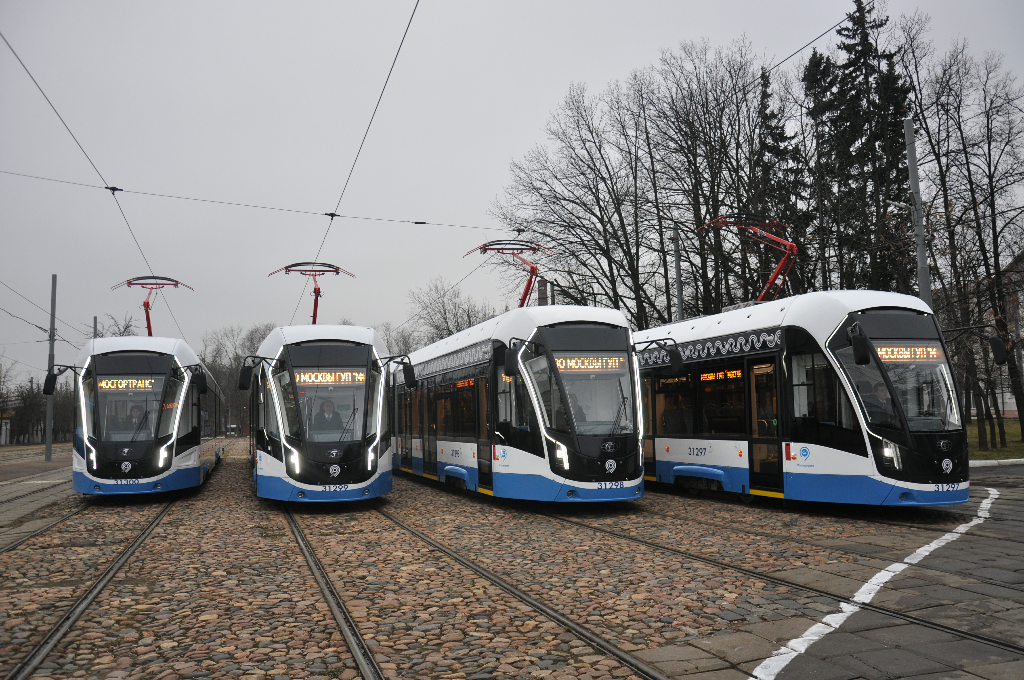