On April 12, 2021, a presentation of the upgraded 71-931M Vityaz-Moscow trams, manufactured by PC Transport Systems and put into operation for the first time in the North-West district of the city, was carried out on the tram ring in Leningradsky Avenue near the Sokol metro station. 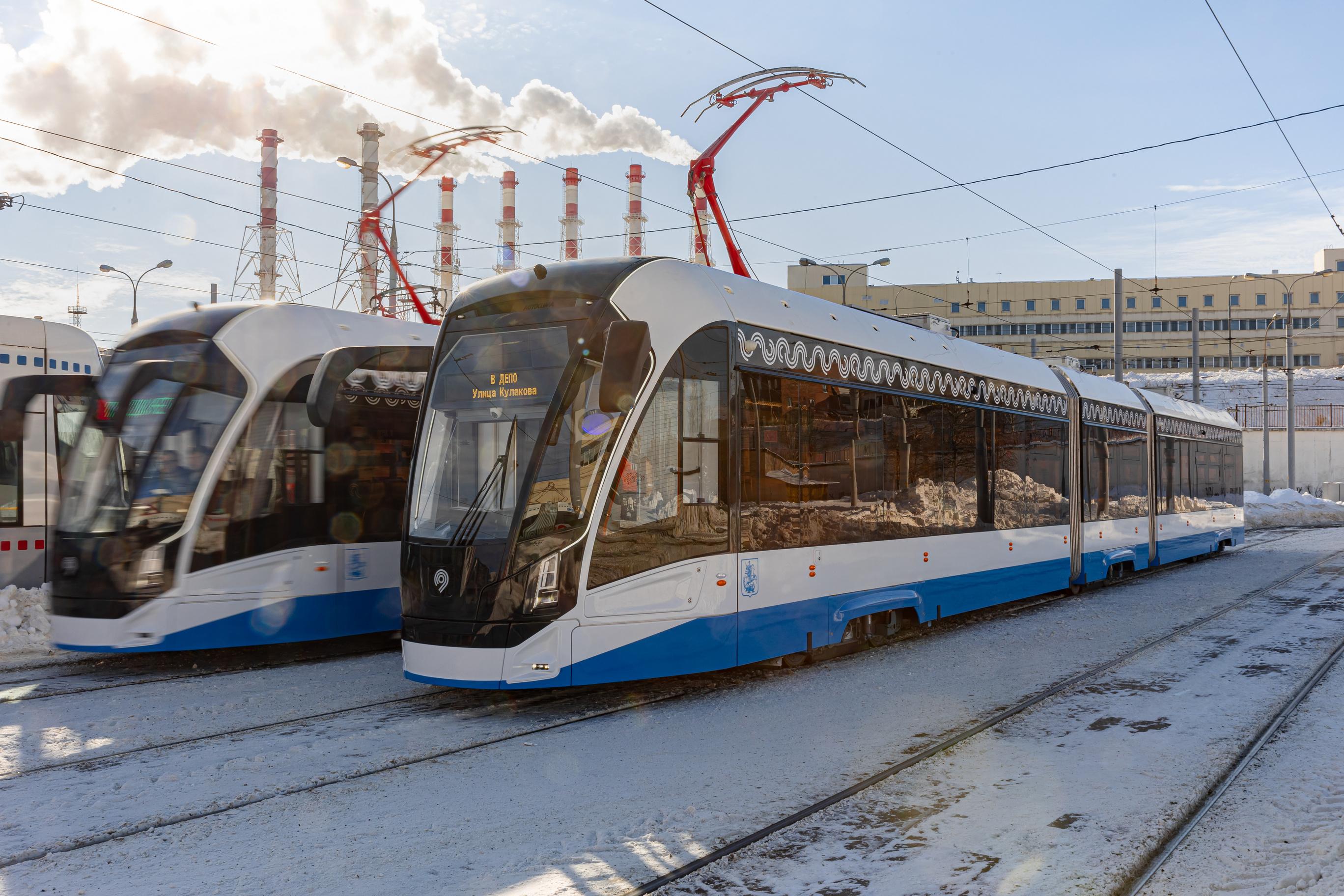 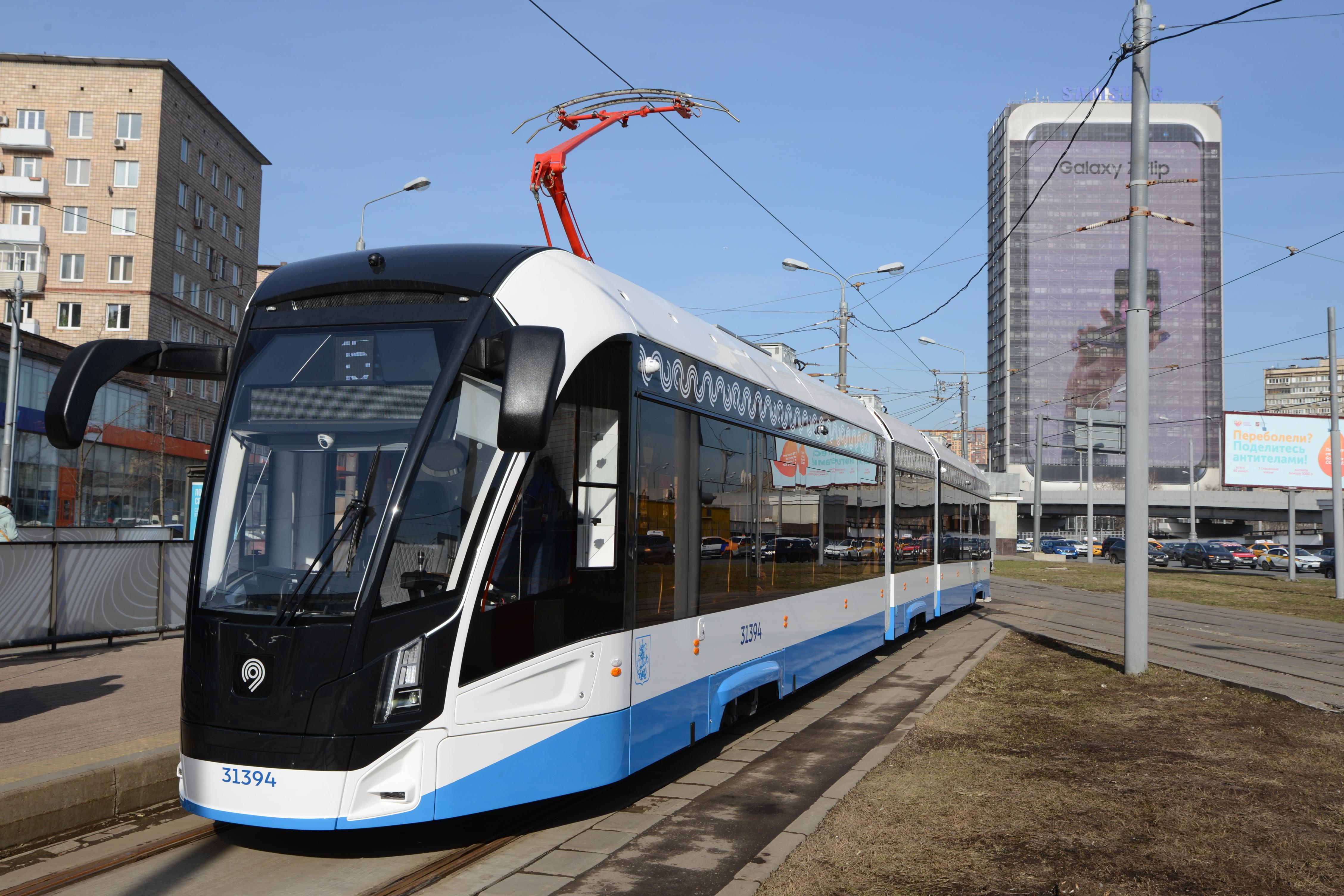 The representatives of the Department of Transport and Development of the Road & Transport Infrastructure of Moscow, as well as the manufacturer of Vityaz-Moscow trams - PC Transport Systems - participated in the event.

"These are the first Vityaz-Moscow trams that appeared in the North-West district of the capital. This is a new delivery. The upgraded tram model has improved exterior and interior design, the aisles in the interior have been expanded, the number of seats has been increased to 70, unlike the old 60-seats version. In the upcoming years we shall upgrade the entire tram fleet of the city, and solely modern low-floor trams will run everywhere, including the North-West district of Moscow", Vladimir Titov, the Head of the Moscow Metro Development Administration of the Department of Transport of Moscow, commented.

"Moscow has set a unique trend not only in terms of the intensity of upgrading the urban public transport rolling stock, but also in terms of its quality", Andrey Yukhnenko, Commercial Director of PC Transport Systems, said. – Now our modern Vityaz-Moscow trams have been put into operation on new routes, and this means that now even a greater number of Moscow dwellers will be able to use high-quality transport services. Effective feedback from passengers facilitates in improving our vehicles on an ongoing basis. So, this time again we did our best to make them better."

The trams delivered in 2021 have a number of distinctions from the previous versions. In particular, 65% of passenger seats are the forward facing seats. Therewith, all the seats are console-mounted. Due to the narrow gearbox installed, the aisles in the interior have been expanded by 5%.

Now the passengers will be informed even better – LED information screens have been made larger with increased resolution. The comfort level has been improved by way of the trams air conditioner power increase with concurrently reduced noise level.  The entrance areas are now supplied with heating feature – dedicated hot air blowers prevent penetration of cold air into the interior.  The number of repeated doors opening/closing operations have been reduced by means of dedicated photo sensors installed in the doors to identify the presence of passengers in the doorways.

And more about the doors – they are now manufactured of a single glass piece and illuminated in green when being opened and in red when being closed. In addition, the entire tram body has a contour illumination accompanied by the Mosgortrans logo. The front illuminated display has also been redesigned with a route number added.

An additional ramp for wheelchairs and a bracket for bicycles transportation have been integrated into the tram. For the convenience of passengers with limited mobility an area with a separate intercom device for communication with the tram driver has been arranged. And the "talking city" system has been installed for visually impaired passengers.

Within the scope of improving the safety of passengers, a face recognition system has been installed in the tram, the fire extinguishing system has been improved, non-flammable and self-extinguishing insulation materials and cable wiring have been used in the interior design. Apart from that, a button for emergency descending of the tram pantograph when it gets caught has been added in the driver's cabin.

The new tram performance has been improved as well: the tram will now become more energy efficient. The integration of the supercapacitors system will reduce the cost of electricity consumed for electric traction and will ensure a smooth travel.

PC Transport Systems have delivered upgraded Vityaz-Moscow trams under the contract for the manufacture of 114 trams for Moscow. Over a period from January 1, 2021 to June 30, 2022 the company is to deliver 74 nos. three-section 71-931M Vityaz-Moscow trams and 40 nos. single-section 71-911EM Lvyonok trams to the customer. These trams have been already successfully put into operation in Ulan-Ude, Perm, Ulyanovsk, and Izhevsk cities.

Currently there are 390 nos. Vityaz-Moscow trams in the Moscow tram depot.  In December 2020 PC Transport Systems completed the delivery of 90 trams one month before the scheduled deadline under the additional agreement. In autumn 2019 the company fully performed its obligations under the contract for the supply of 300 nos. Vityaz-M 71-931M tram cars in 2 years, 6 months and 6 days, which is recorded in the Book of Records of Russia and Europe as the largest number of three-section trams supplied under a single contract to a single city.