September 17, 2020 at the Nevsky Electric Transport Plant named after F.A. Pirotsky (part of PC Transport Systems), Governor of St. Petersburg Alexander Beglov during his working visit got acquainted with the production of the first tram in Russia, the body of which is made of aluminum. Now the new modification of the 71-931 M tram was named Vityaz - Leningrad.

“I would like to say gratitude to the management of the plant for the development of this 21st century tram - beautiful, comfortable, low-floor. Its body is made of aluminum, its weight is 20% less than a conventional tram, which reduces the load on the rails, reduces vibration. And for our city, especially its central part, it is very important: there are historical buildings around, we reduce the load on them, "stressed Alexander Beglov.

The new trams with an aluminum body will contain the best developments implemented in the latest Vityaz M modifications. Due to the modernization of the tram bogie, the movement of the car will become even smoother and more quiet. The exterior design and ergonomics of the cabin will also undergo restyling: LED lighting lines, more modern climate control systems, media complexes for broadcasting route information, as well as USB connectors for recharging mobile gadgets and access to a new type of Wi-Fi. The car will also be equipped with modern control systems, video surveillance, GLONASS / GPS position sensors, comfortable stainless steel seats and wide doors with a memory function.

“We are completing the production of the first tram in Russia, the body of which is made of aluminum,” comments Feliks Vinokur, President of PC Transport Systems. - We have set ourselves an ambitious goal - to become the first Russian manufacturer to make an all-aluminum tram. And we succeeded. We named our innovative product "Leningrad" - as a sign of respect for the glorious traditions of St. Petersburg tram construction. After all, it was here that the first inventor of the tram, Fedor Pirotsky, lived and worked, in whose honor our Nevsky Electric Transport Plant was recently named. It was St. Petersburg that for a long time was the tram capital of the world with the largest tram system, which was included in the Guinness Book of Records. This city is of great importance for our company, so we could not help but dedicate one of our products to St. Petersburg. "

At the initiative of PC Transport Systems, a passive safety system will be installed in all trams of this model - an emergency crash system of our own design, which is designed to reduce the risk of injury to passengers and other road users, as well as to protect the main parts of the car structure in the event of an emergency collision. Installed energy absorbing body elements and hydrodynamic crash elements installed on the front and rear bumpers of the tram car will absorb kinetic energy. In Russia, this technology is not yet used on tram bodies.

To create the first aluminum tram body, PC Transport Systems completely modernized its own production site in Tver - the Tver Mechanical Plant for Electric Transport. The equipment installed here allows you to independently process aluminum profiles, carry out welding, paint and primary assembly of a tram (windows, cab, floors, etc.). This site has no analogues in Russia.

The final assembly of the tram (installation of engines, seats, electrical equipment and interior furnishings), as well as testing and running-in, is carried out at the Nevsky Electric Transport Plant in St. Petersburg. 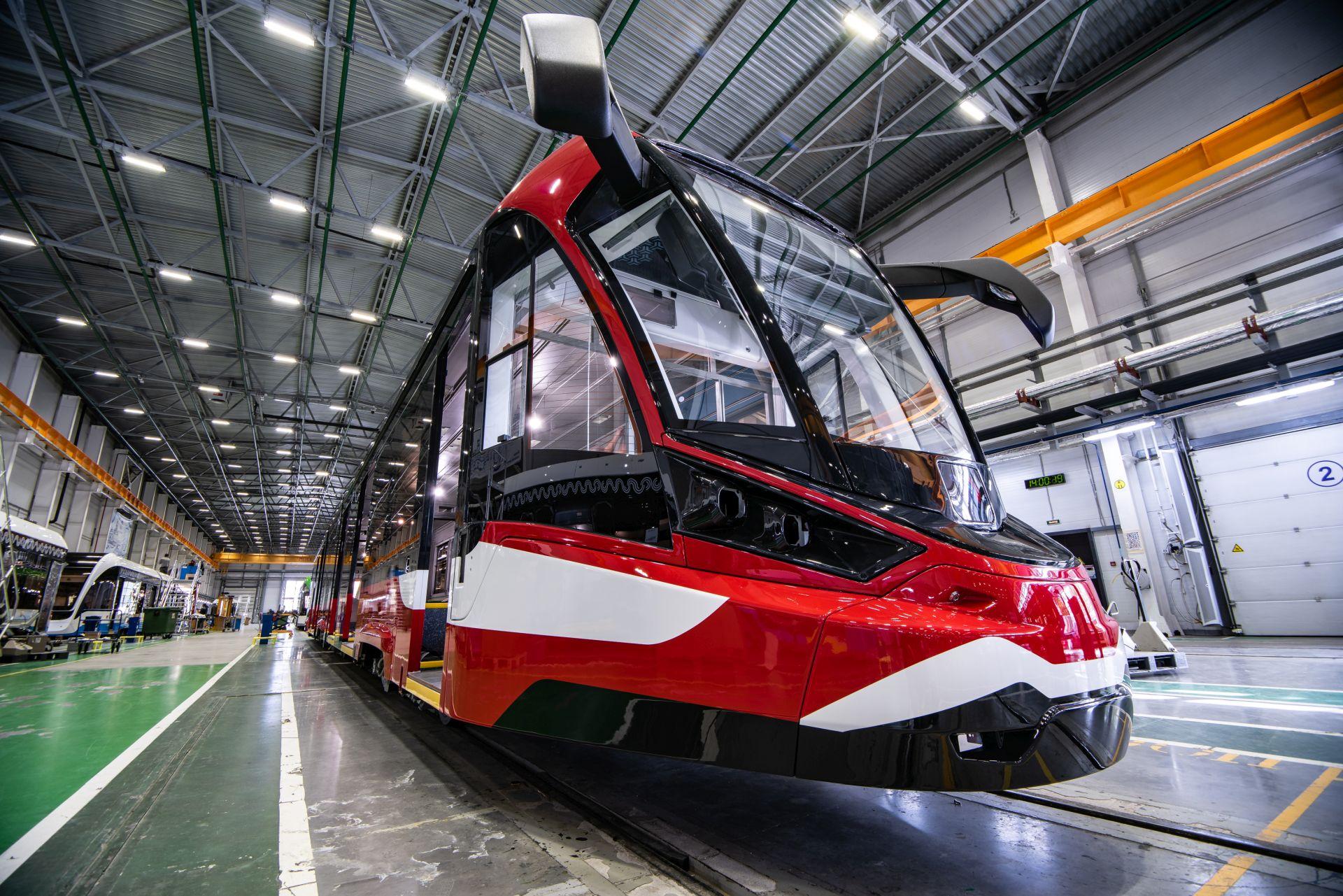 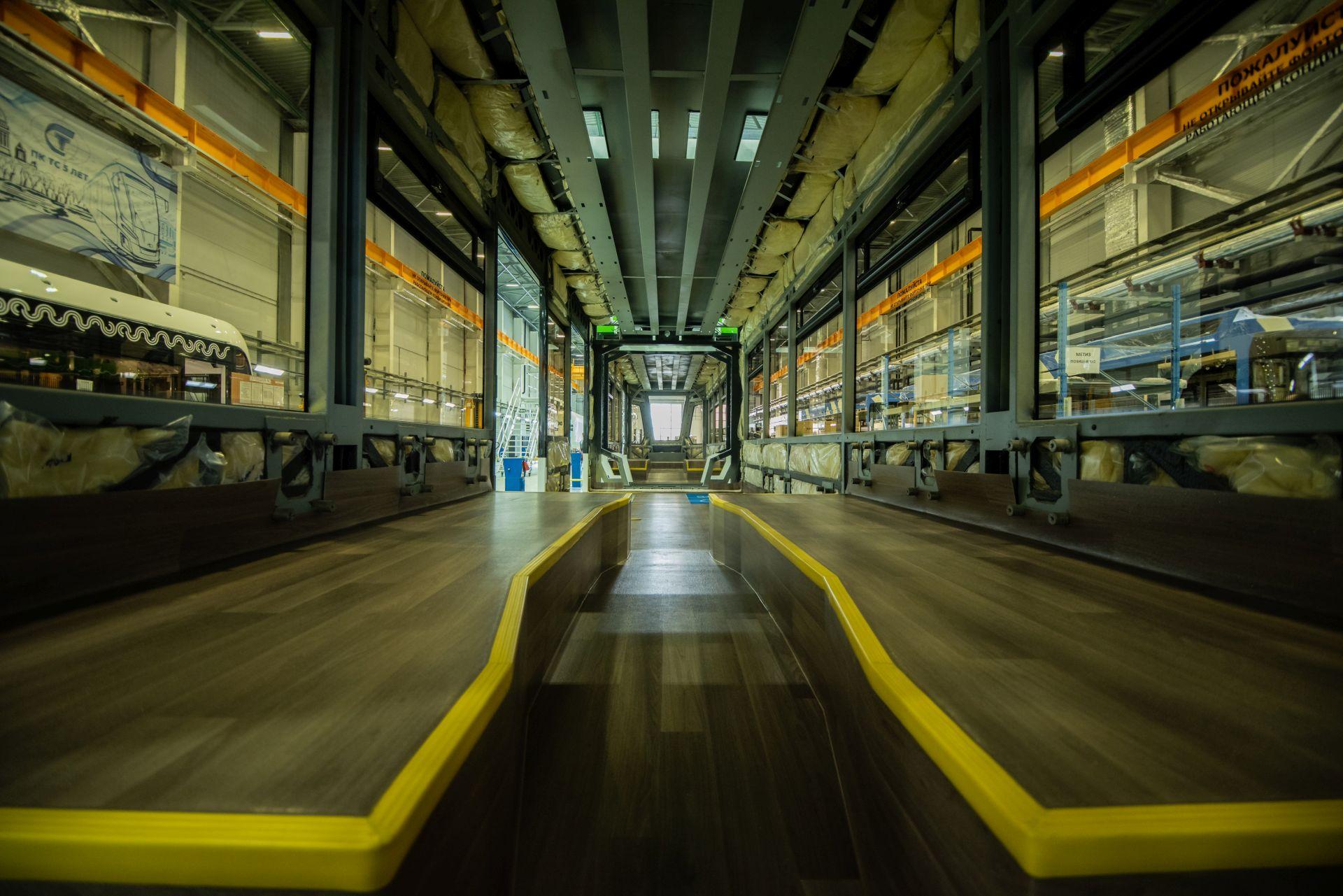